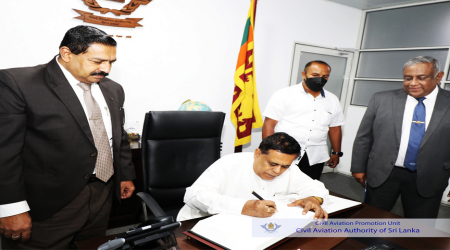 The commencement of the Batticaloa Development project planned for an extension and overlay to the existing runway, fixing of runway lights and construction of a new terminal building as well as the apron; the area where aircraft are parked. As the Batticaloa runway is locked at either ends between the lagoon, it could not be extended beyond 1,560 meters, which is adequate for operation of 60 seater aircraft. Runway expansion work was done initially by the Road Development Authority (60%) and the balance part was completed by Sri Lanka Air Force. The total budget allocated for the reconstruction of the runway, apron and terminal building which is Rs.1,400 million was borne by the General Treasury. 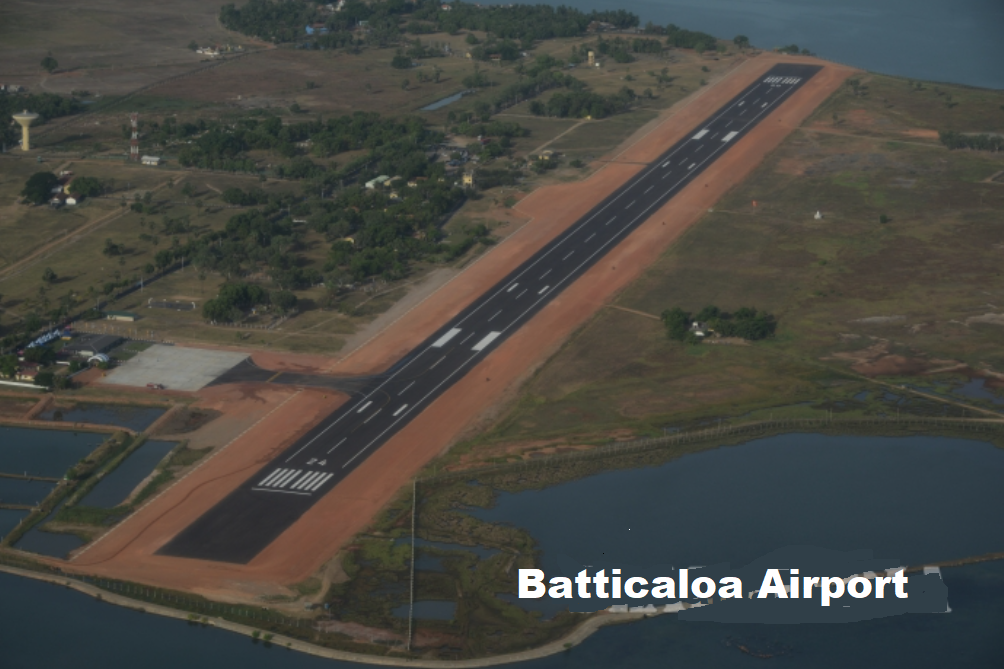 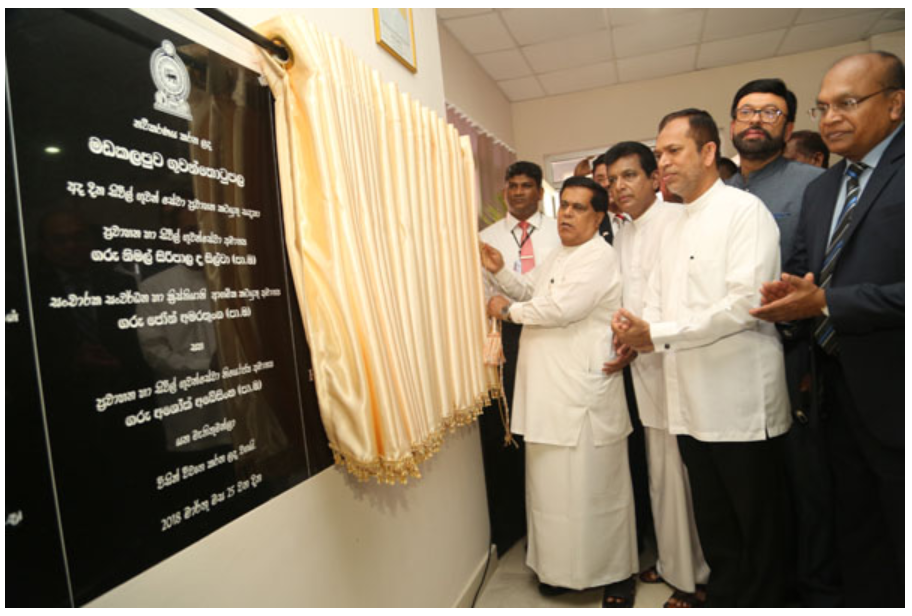 Vesting of Ratmalana and Bandaranaike International Airports in the CAASL

2018.03.29 :Opening of the CAASL Head Office Building at Katunayake Decorated building for over-night pirith chanting ceremony is seen below 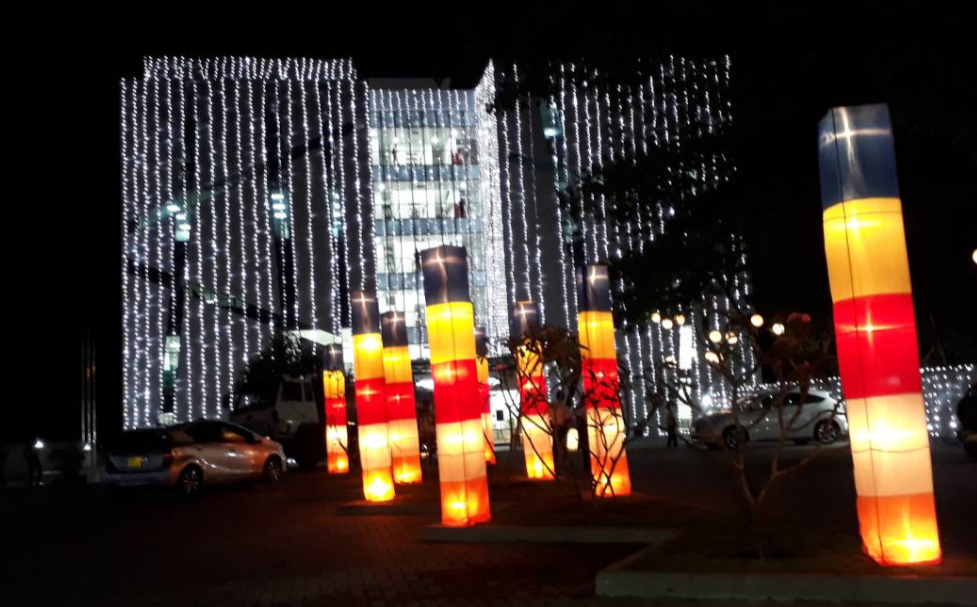 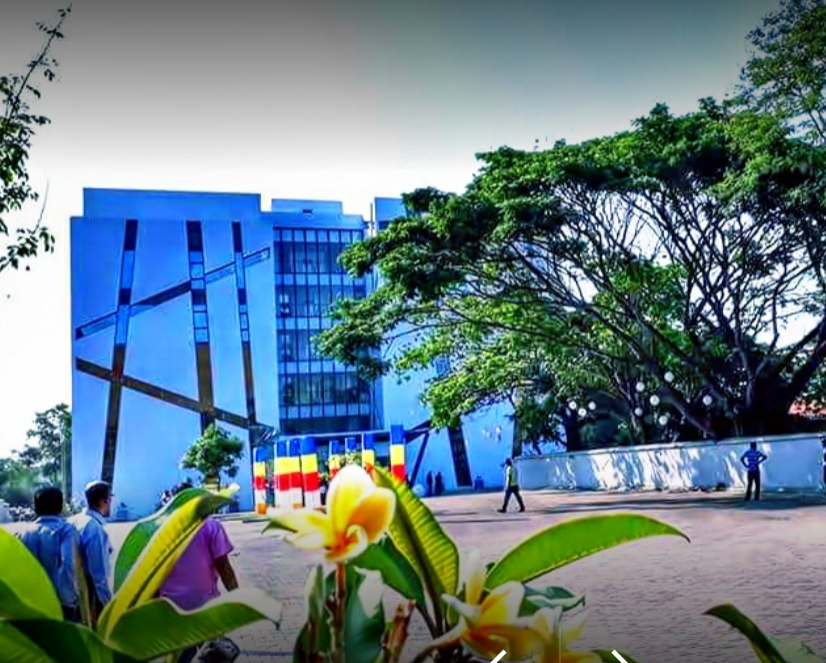 The very first building in which Department of Civil Aviation commenced work in 1946 with its establishment.

06.01.2017 : Commencement of resurfacing programme of the BIA runway by closing it for commercial operations between 0830 hrs and 1630 daily for a continuous period of three months ending on 06.04.2017. Hon. Nimal Siripala de Silva, Minister of Transport and Civil Aviation launched the work by waving a green flag.

The AASL has selected through approved competitive procurement process the following consultant and contractor for the runway resurfacing with the approval of the Cabinet of Ministers.

Total Cost: The total cost of runway resurfacing is estimated to be Rs.7.2 billion and it will be financed totally by the Airports and Aviation Services (Sri Lanka) Ltd.

06.04.2017 : Resumption BIA runway operations after completion of the resurfacing programme, as planned.  SriLankan A320 Neo brand new aircraft landed after Hon.Minister declared the runway was open for normal operations.

53rd Conference of Directors General of Civil Aviation was held in Sri Lanka from 01-05 August 2015, at Hilton Colombo.

2015.12.14 - Hon. Nimal Siripala De Silva, Minister of Transport and Civil Aviation laid the foundation for the construction of CAA Headquarters at Katunayake BIA premises. The estimated cost of the building is Rs.803 million. 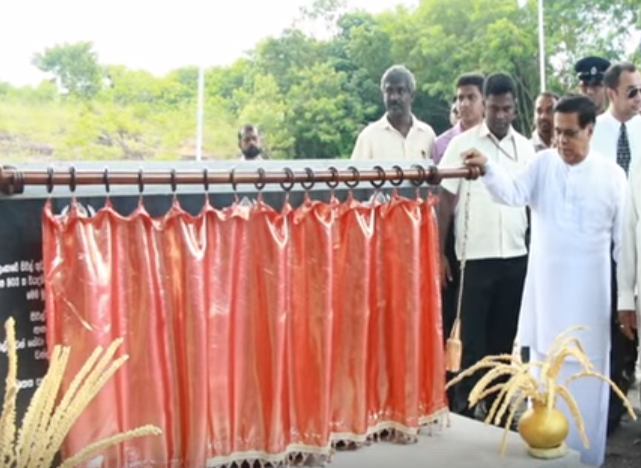 2015.01.17 - SriLankan Airlines stopped all commercial operations into and out of Mattala Rajapakse International Airport, Hambantota.

2015.01.25 - Mihin Lanka Ltd suspends all operations into and out of Mattala Rajapakse International Airport. 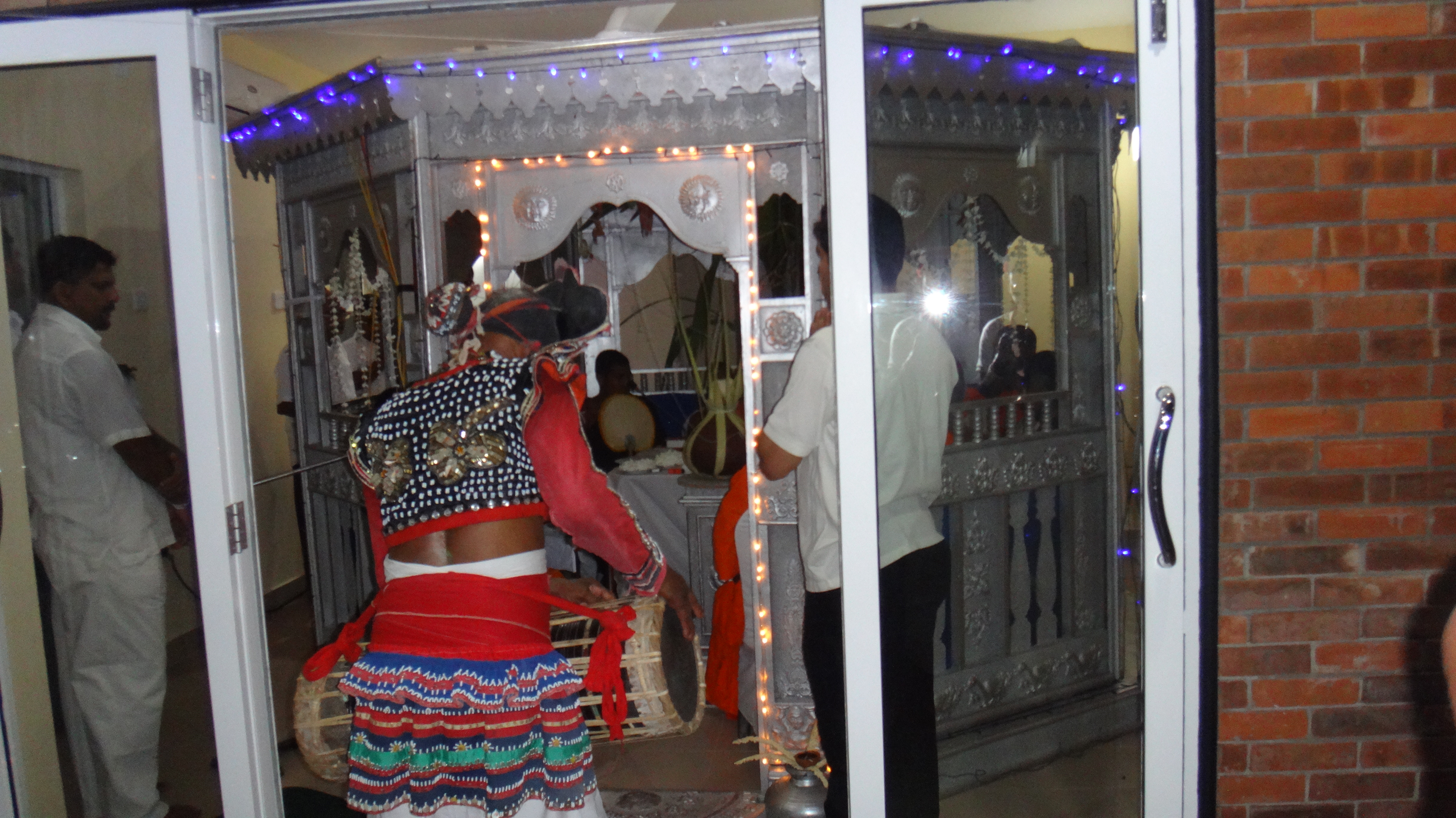 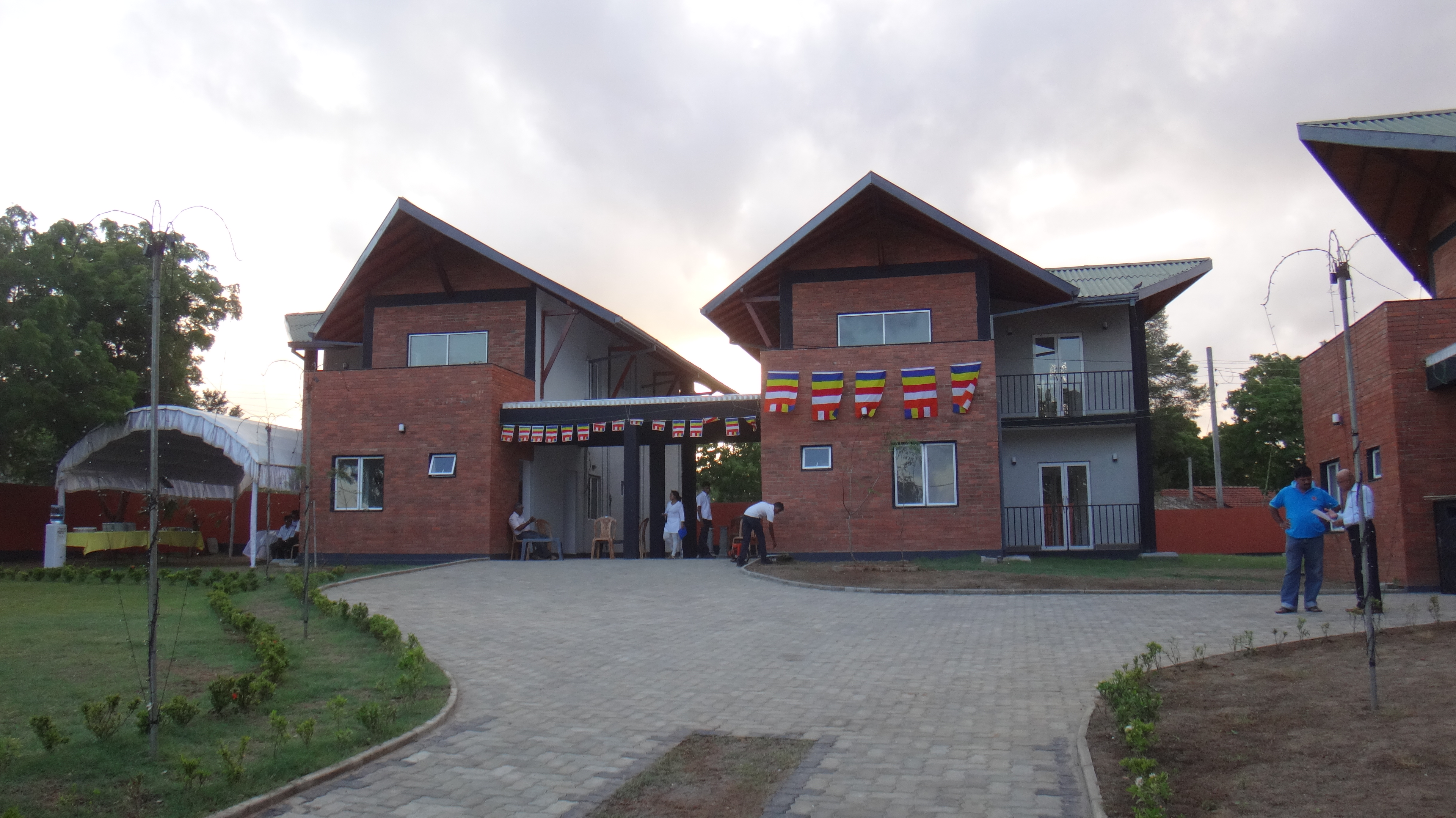 09.06.2014 - Opening of CAA office at MRIA by the Minister of Civil Aviation Hon.Piyankara Jayaratne

22.06.2014 - Ceremonial inauguration of the aviation refueling terminal with fuel hydrant facilities at MRIA by the President, His Execllency Mahinda Rajapakse Page is under construction 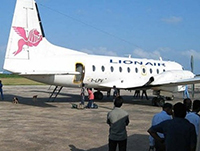 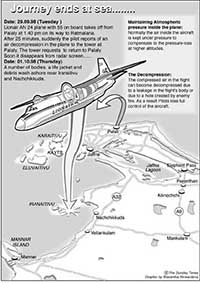 1994 – Registered airline in Sri Lanka were permitted to commence operations to domestic airports.

1990 – Liberalization of carriage of air freight

1984 – Commencement of construction of new runway at Katunayake Airport 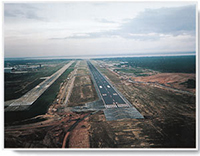 15.11.1968 – Opening of the Katunayake Airport for international flights

01.11.1957 – Handing over of Katunayake Royal Airbase to Sri Lanka by the British Government

1955 – Promulgation of Air Navigation Regulations of 1955

10.12.1947 – Inaugural flight of Air Ceylon to Madras after name change from Ceylon Airways

1939 – Construction of Palavi Airport at Puttlam as an emergency airfield

07.05.1931 – Arrival of the first International flight to the Race Course from Mumbai